Answer Me This! + a few pictures

Linking up with Kendra again!!

1. How long have you lived in your current home?


It'll be 5 years in September! So, for most of our marriage (been married for 6). We really do love the actual house itself, with all its quirks (it's old and has a couple additions), and we also love our location....but we don't have much of a yard. So if we ever move, it'll be for a bigger yard.

2. How do you find out about news and current events?


Logan or Facebook. Usually Logan since I'm not on FB as much as I used to be. I know I should watch the news but it's just too depressing for me.

3. Would you be able to make change for a twenty right now? For a dollar?

Yep and yep. We always have cash. Always. That's what happens when (1) you're married to a valet driver, and (2) you do the cash envelope system (which we've been doing for years now, even before Logan made tips).

Not bugs, I can tell you that. Yuck. We could have eaten some at the Insectarium in New Orleans but...no. Not our cup of tea. So! I guess I have to say squid (calamari). Is that even considered weird? I don't know. I've also eaten alligator but that's not very weird for someone who lives in Louisiana.

5. Which of the commonly removed parts have you had removed? (tonsils, wisdom teeth, appendix, etc.)

All 4 (impacted) wisdom teeth and it was the worst thing ever. Not kidding. I ended getting a hematoma in my gums after the surgery, so my mouth was still swollen and I started bleeding. I couldn't eat for several weeks until so I lost weight. But then I got pregnant with Landon so I guess it all worked out in the end. ;)

6. What's your favorite sport to watch on TV?

Hmmm, this is a toss-up. Because while obviously soccer is my favorite sport...it can be a little frustrating to just watch because it makes me want to play. And I tend to get emotionally involved.

I really, really enjoy watching football because it's the other main sport where I actually know all the rules and I don't have the desire to play. Aaaaand there are commercial breaks - unlike soccer - so you can do other things while watching. With soccer, you go to the bathroom and end up missing your team score. Ugh.

So, maybe I should just say professional football. Yeah. Let's go with that. Who dat!!

--------
And now a few pictures because I haven't been sharing too many lately. We had a super fun week last week...waterpark and the zoo! 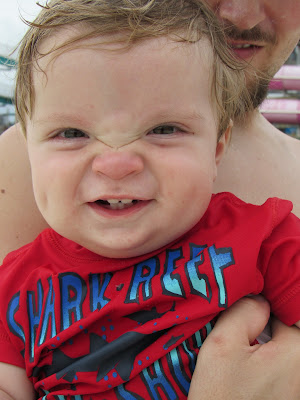 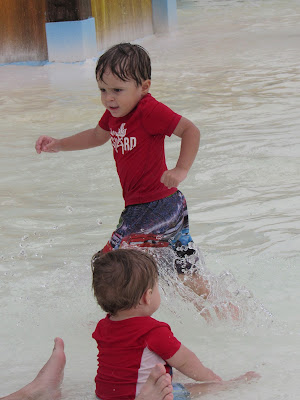 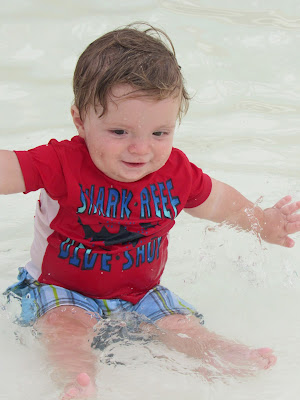 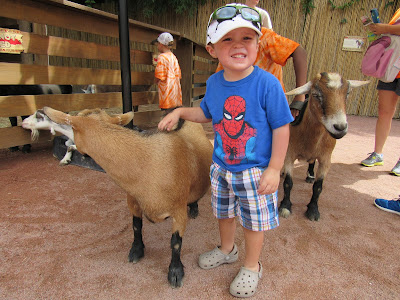 And at the zoo, Landon was totally loving the petting area!
Posted by Jen at 5:55 PM