Ten years ago, I was starting college. It was a rough transition, since I moved into the dorms and didn't have any friends from high school with me. I was at a school less than an hour away from my hometown, but my sister and 2 best friends were at a different college, a couple hours away. Logan was still living with his parents and going to school in New Orleans, so I was only going to see him on the weekends if I went home.

After 5 days of classes, Hurricane Katrina was projected to hit New Orleans. There was a mandatory evacuation, so my parents and I headed west, away from the storm. It was Saturday, August 27, 2005.

The next day, I wrote this in my journal:

Wow. This is really surreal. Meteorologists, politicians, and other people (including my dad) seem to think that this hurricane will mean the end of New Orleans. They’re predicting up to 20 and 30 feet of water in the city. Right now my family is assuming that we won’t have much of a house to go home to. It’s pretty scary. It’s been difficult to call people with the networks being so busy. I talked to Logan for about 10 minutes (if that) the entire day. I’m not sure when I’ll get to see him. Ah, I just don’t know what to think. This is a life-changing event. I might not have school for a LONG TIME. It really sucks to think about what could happen in the next couple of days. I just keep telling myself that everything happens for a reason. Man, I don’t know what else to say…or think. Everything is in God’s hands. Maybe the hurricane will just disappear…


I still remember my mom saying that she couldn't sleep that night. We've evacuated several times before - it's just part of life in southeast Louisiana - but that was the first time we really wondered if we would go back to a standing house.

The storm took an eastern turn and hit on Monday, August 29, 2005. By the end of the day, we were hearing reports about neighborhoods that were underwater and people being stranded on their roofs. It was crazy seeing all these familiar places on the news. Thankfully, we heard that our neighborhood was fine - just didn't have electricity, sewage, or water. We weren't allowed back home for a few days and ended up having wind damage to our roof and fence. But otherwise, we were counting our blessings!

Although the storm damage itself ended up being minimal, many aspects of life changed. It was hard getting in touch with people because the cell phone networks were so busy. I would go days without hearing from Logan, who had evacuated to Arkansas. My classes were cancelled for a week and a half. All schools in New Orleans closed for the entire semester, which meant my school took an influx of new students - including Logan. My campus also had a hurricane relief area for weeks.

My brother and a few friends were living in a house that was flooded, so he and two of his roommates moved in with my parents - and brought their small business with them. So I had a couple extra "big brothers" when I went home on weekends. It seemed like so many friends ended up moving away or going to school several states away. Never before had a hurricane affected life that much.

The crazy thing is that in many ways, it could have been much worse. If the storm had stayed on track towards New Orleans, even more neighborhoods would have been underwater. And so many times I wonder if it's worth staying here. Each hurricane season we wonder, is this the year another big storm hits?

But anyone who has lived in New Orleans and the surrounding area knows that it's a special place. Good music, good food, and faith-filled people. We know New Orleans is a stronger and better place because of Katrina.

And unless God calls me elsewhere, I'm happy - and proud - to call Louisiana my home. 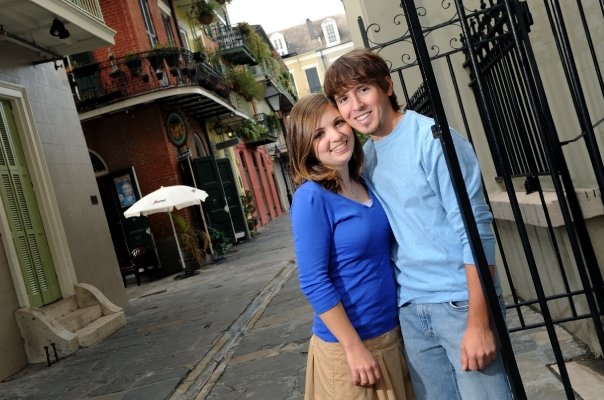