Sometimes you gotta blog it out

I had to bring Chase to see his pediatrician this morning as a check-up before his eye procedure this week (blocked tear ducts, eh), so I put the boys in the van and then got in myself. It took me probably longer than it should have to realize that I wasn't actually going to be able to drive anywhere - since I definitely started buckling myself into the passenger seat.

Pregnancy brain at its finest.

Anyway! As life would have it, Chase started with snot this morning so if you would say a prayer that it clears up in time for his procedure on Thursday, I would greatly appreciate it. He doesn't have fever and his ears and lungs are clear, so he should be fine for surgery (and his doctor did clear him), but still...I'd feel much better if he was 100%. Prayers all around for a successful procedure are appreciated too (and that I don't go into labor or something crazy, because that is definitely how my mind works...#worstcasescenario).

I feel like it's been forever since I did a general update on family/life/whatever, and that's pretty much all my brain can handle for today, soooo here we go.

Life has been good and slightly stressful at the same time. We've been busier than I'd like, but I suppose that's just springtime for ya. Parties, First Communions, fundraisers, etc. Logan was also in charge of one of those fundraisers (which went well, yay!), so now he's finally been able to work on our backyard project when it's not raining. But it's been raining a lot, unfortunately. April showers and all. 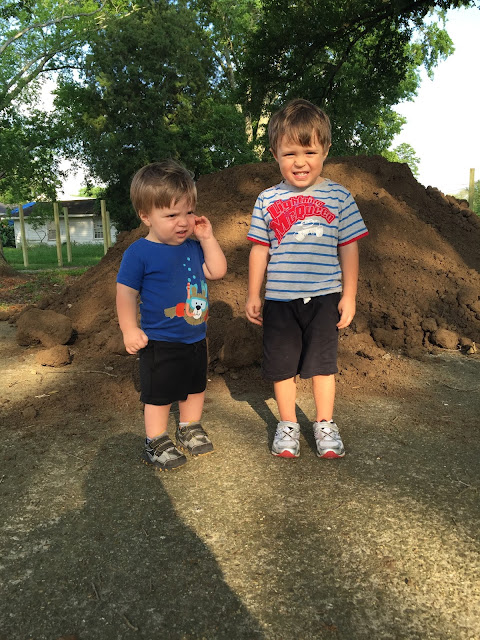 We finally got (freeeee) dirt delivered and Logan is working on leveling out our flood-prone backyard.

Our boys, as cute as they are, have been rather difficult lately. It's amazing how much a little person you love so much can make you SO CRAZY. 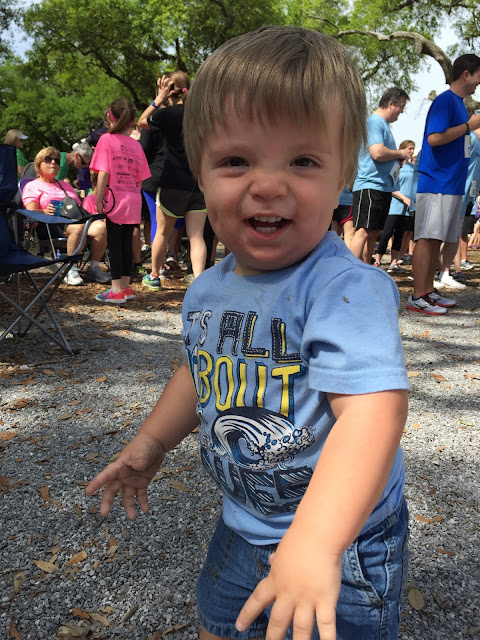 Like this boy. The dimples seriously are his saving grace sometimes, because his favorite thing to do now is SHRIEK AT THE TOP OF HIS LUNGS whenever he is slightly hungry, annoyed, or tired. Or sometimes just when he's happy. And sometimes a lot of times his big brother likes to annoy him...so you can imagine how fun playtime and going to Mass is right now. And running errands. I'm fairly certain Landon did a similar thing at this age, so I'm just hoping it's a phase that passes quickly. Like, preferably tomorrow. But I will settle for June. 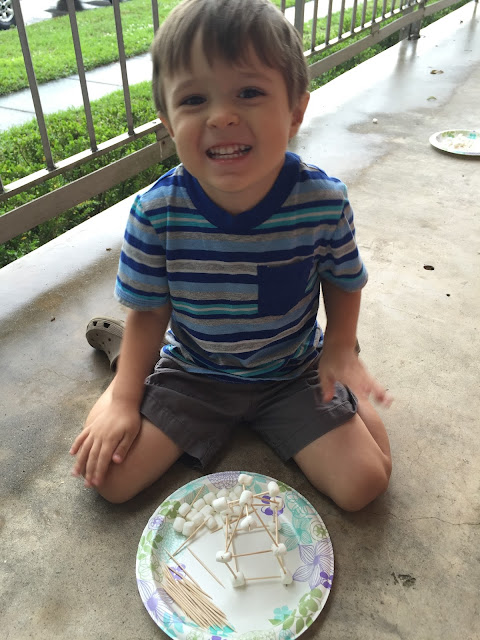 And this boy. He talks SO MUCH. And I never knew a 3-year old could be so argumentative and bossy until these last few months. Even when I fully (and calmly) explain why he cannot have another snack/go outside/go to a friend's house/watch TV/kick his brother/whatever else he wants, he still has to argue and lose his you-know-what over it. It's exhausting. I know (at least I'm telling myself!) he will do great things one day, this sanguine/choleric. But for now, he makes his melancholic/phlegmatic mother hide in another room just to get 2 minutes of silence.

But I do have to say that they both can just really melt my heart with their voluntary hugs and kisses and cuddles. And most days they both nap, and that's probably the only reason I'm somewhat sane. (Seriously, Landon has had more naps as a 3-year old than he did as a 2-year old. I don't understand.)

OH and hey! I'm 28 weeks pregnant! This pregnancy has definitely been the smoothest, which I'm so thankful for, and I honestly cannot believe I'm already in the 3rd trimester. Less than 11 weeks left! Craziness.

I have more I could blab on about but I'm sure half of you have clicked away by now. I'll leave the rest of the fun for another day. ;)
Posted by Jen at 7:50 PM