How we've survived these past 8 months

I hesitate calling this a survival season, because life could very well get even harder once Aaron is outside of my belly as opposed to inside my belly. Plus, this pregnancy has been easier than the last 2, partially because I've had less doctor appointments and scares, and partially because I've learned a lot over the years.

One thing that has been the same for all pregnancies, though, is the fact that I can't do nearly as much as I can when I'm not pregnant (if you're new here, I have an incompetent cervix...and a very irritable uterus). But somehow we've survived, and I'm still sane! I cannot say the same happened the last 2  times.

Here are some things we did that made life easier these past several months, and maybe they'll be helpful for you too! Whether you're in a survival season or just a slightly busier season than usual.

Dishes and laundry, y'all. As long as you keep up with those 2 chores, everything else seems manageable! No, our bathrooms have not been cleaned every week and our floors have certainly not been mopped every month (far, FAR from it).

I told myself that the one thing I would keep up with is laundry....and I have! Logan took over dishes for the most part since that requires more standing. But we also help each other out because dishes and laundry are never-ending, and really, they're the 2 things that keep a household running relatively smoothly. 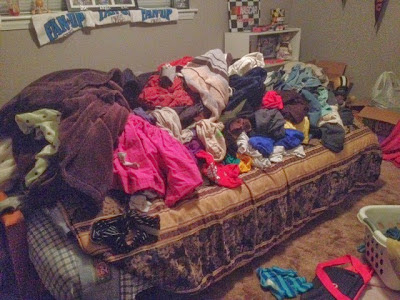 Flashback to when I was pregnant with Chase...why yes, all of this laundry was clean. And not put away. But that hasn't even gotten close to happening this time!

Food is obviously important, and I'll be the first to admit that I'm not the best at meal planning. It's even worse when I'm pregnant, because I can't just hop to the store whenever I so please because shopping trips usually bring on the contractions. So, Logan and I have been planning meals together, which has made alllll the difference. This is one thing we go over every Sunday when we have our weekly marriage meeting that I mentioned in this post.

Granted, this is something that should be done before a survival season, and I'm so glad I did some major decluttering last year. It hasn't been nearly as hard to keep the house relatively clean this go-round because we just don't have as much stuff - even with an extra kid!

I will admit that I've continued to get rid of stuff while pregnant, little by little. If something causes more stress (which is something we don't need right now), it's GONE. And I don't even feel bad about it.

4. Use modern conveniences to your advantage.

Gosh, I just love when things arrive at my doorstep! Especially in seasons like these when I don't leave the house too often. Thanks to Amazon Subscribe & Save, we have yet to run out of toilet paper or diapers (or anything, really), and it makes grocery shopping so much easier  - especially since Logan does most of it right now - because all we usually need is food. Everything else is shipped straight to our door! We've also been getting Blue Apron deliveries once or twice a month, which is nice because the meals are always healthy with lots of veggies (helpful on weeks we can't get to the store for produce)...and Logan can cook the meals himself if I'm not feeling up to it.

While it totally stinks having a completely different way of life when I'm pregnant, I have to say I am thankful it just lasts 8-9 months. Sure, it still takes a few months after delivery to get things completely back to normal, but knowing there is an end in sight - and that 9 months is just a blip of time in the big picture - gives us something to look forward to. Plus, we get a cute baby at the end! Best thing ever.

My prayer routine was pretty nonexistent while pregnant with Landon (goodness, it was SO hard to pray while on bedrest for some reason), and I'm not sure it was much better with Chase. So I learned from that and actually stuck with a prayer routine this time around! I'm still doing what I said in my rule of life post, and my daily Rosary has probably been the biggest game changer - especially now that I haven't missed a day in months! But I already wrote about what I love about the Rosary and ways you can foster a love for the Rosary. Let's just leave it at this: persevere in prayer and you'll be able to persevere in anything else.

I know I'm forgetting things (pregnancy brain), so what would you add to the list? I'd love to know!

--------
Oh! P.S! Dr. H could not get my cerclage out again (UGHHH) which really shouldn't surprise me at this point, but...apparently I never learn. I suppose it's for the best, though, and I'm just focusing on the fact that Aaron will at least be here by next week! Thank you for the prayers. :)
Posted by Jen at 10:28 PM