I'm about to get all mommy blogger-ish up in here! You've been warned.

Last week, our little family of 4 decided to take a last-minute vacation before Aaron joins us (soon! so soon!). So we decided to hit up the closest beach touristy town, about an hour away from our hospital. You know, just in case. 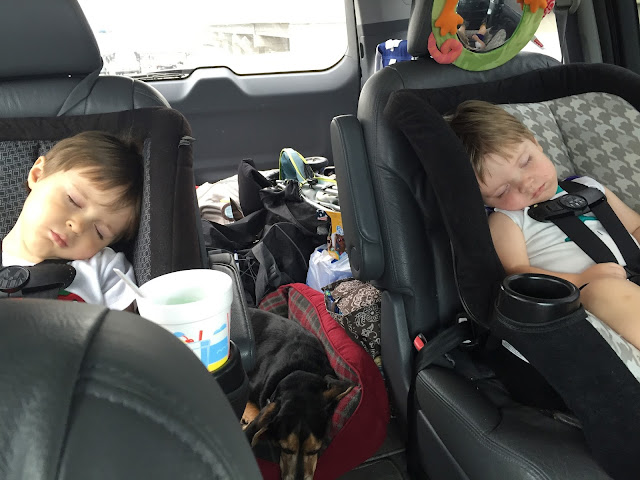 They just can't resist a car nap. And Marley is pictured but we definitely dropped her off at a friend's house on the way (thanks again, Katie!!). 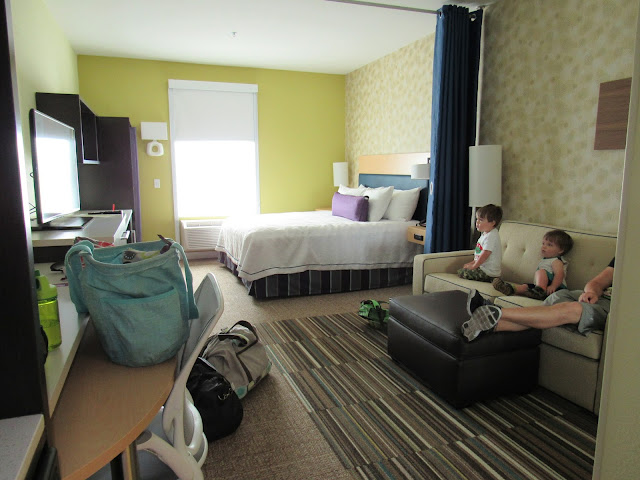 2 nights in this surprisingly lovely room with a curtain between the king bed and queen sleeper sofa. Cute kitchenette not pictured. 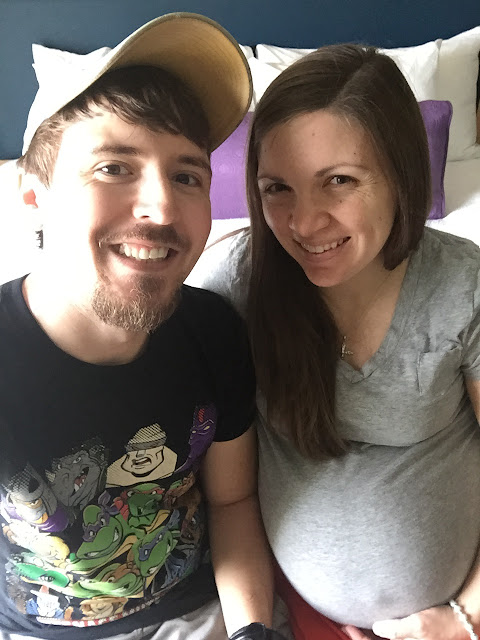 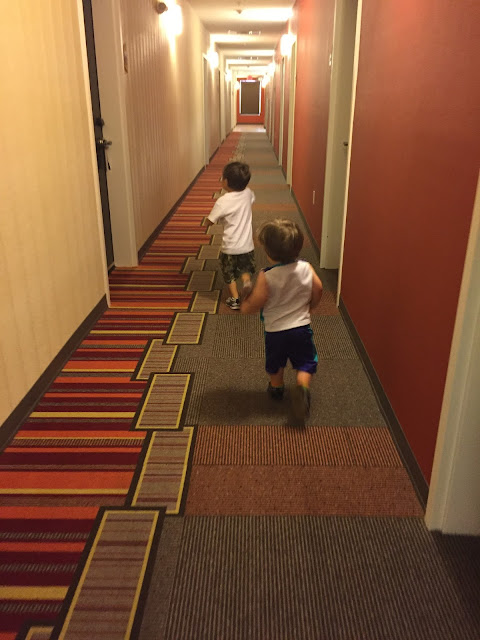 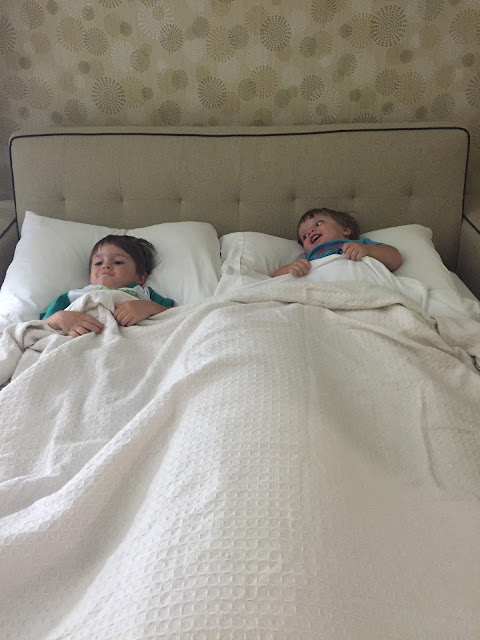 They look super cute sharing a bed for the first time ever but I should say that Chase was a little too excited about being in a big bed. After an hour of craziness, we finally got him to lay down in the pack'n'play. Maybe next year, little man. 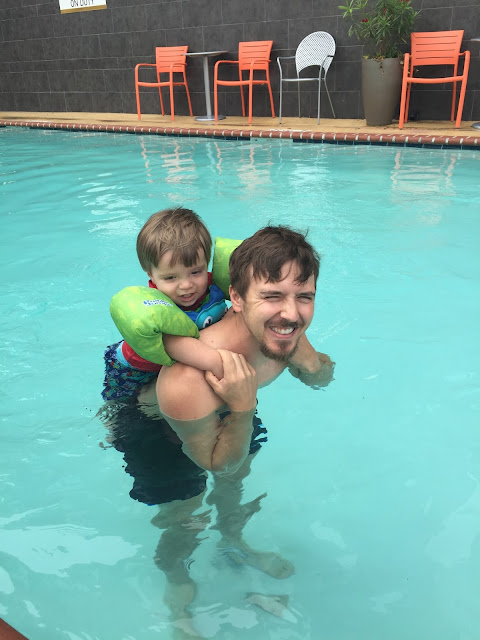 The first morning we did a little swimming.... 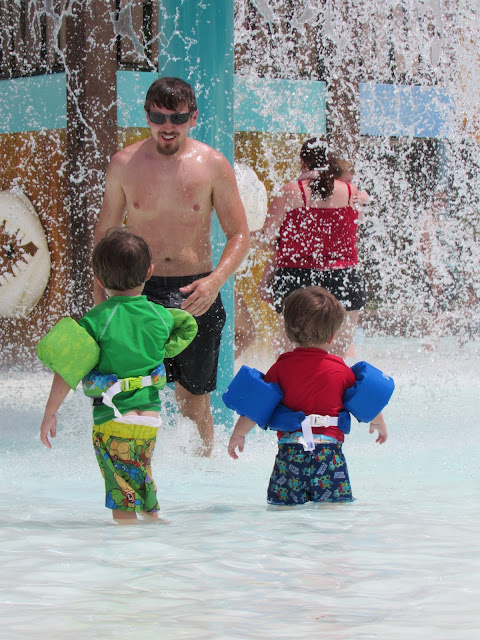 ....and then met friends at the waterpark! 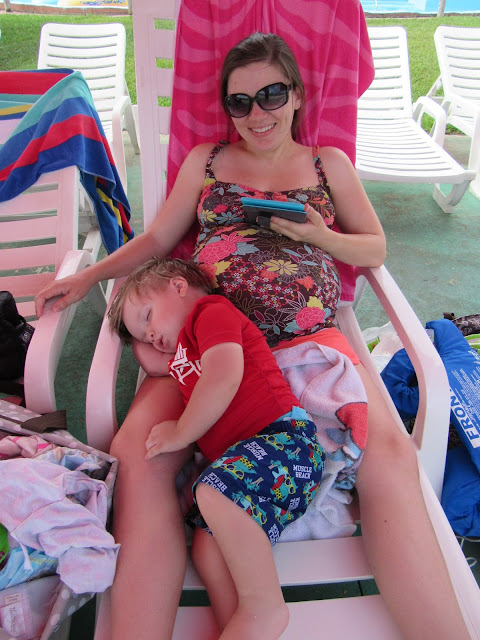 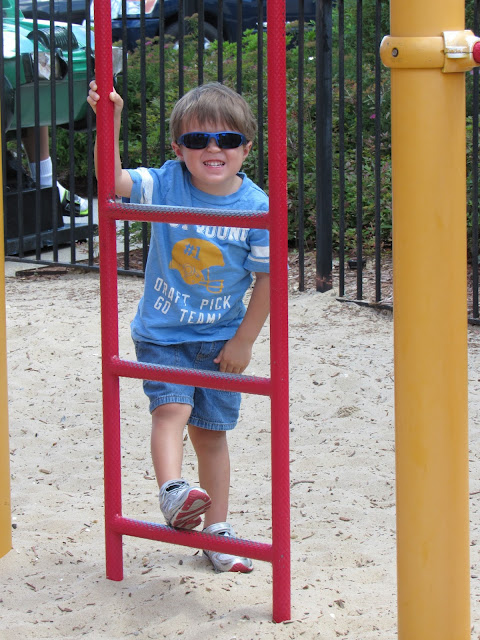 We hit up the outlet mall our last morning but let's be honest, we spent most of the time at the playground area. Landon is sporting his $2 sunglasses we had just bought. 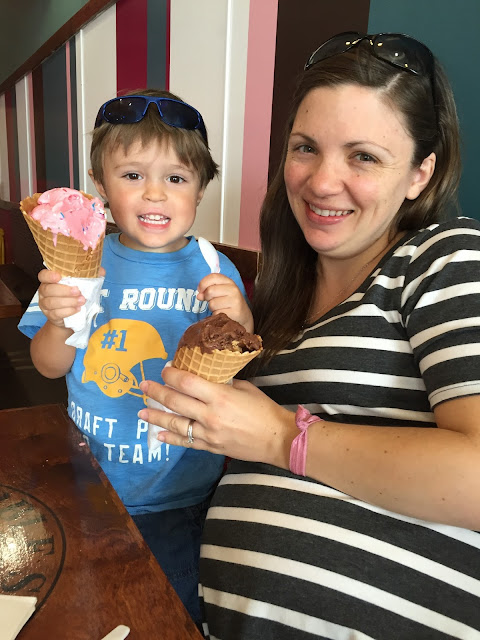 Travel tip: check Groupon! We got 4 cones for the price of 2. The boys were thrilled. 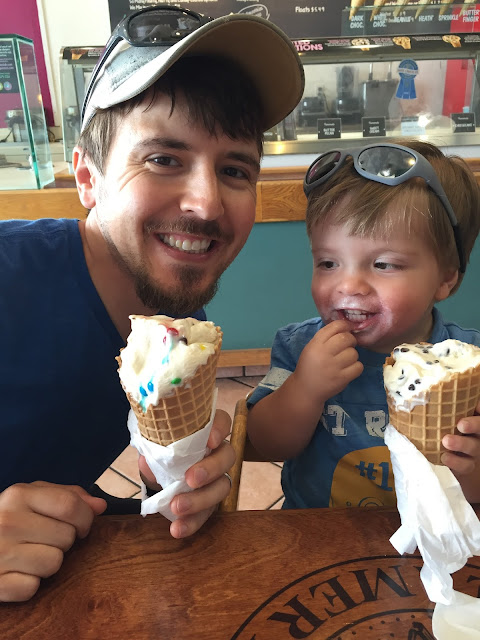 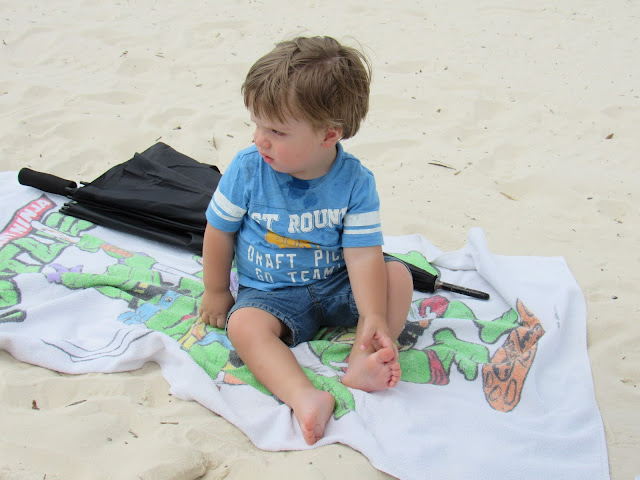 Our last stop was the beach! Chase is all "WTH" because he fell asleep seconds before we got there and Logan carried him (sleeping soundly) to the beach and even laid him on a towel for 10 seconds before he woke up. Sorry, buddy....your big bro really wanted to play in the sand! 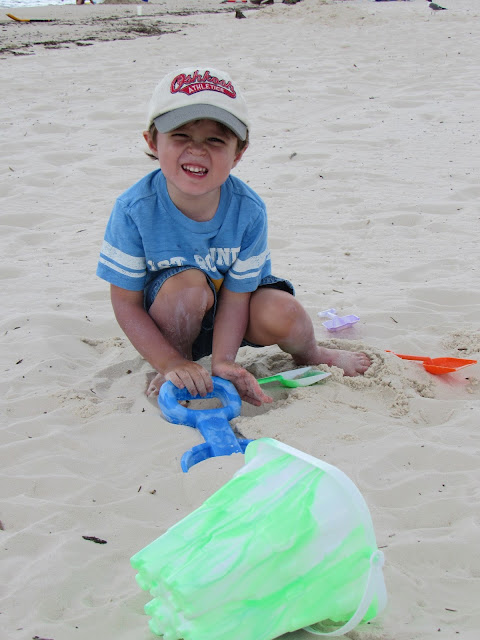 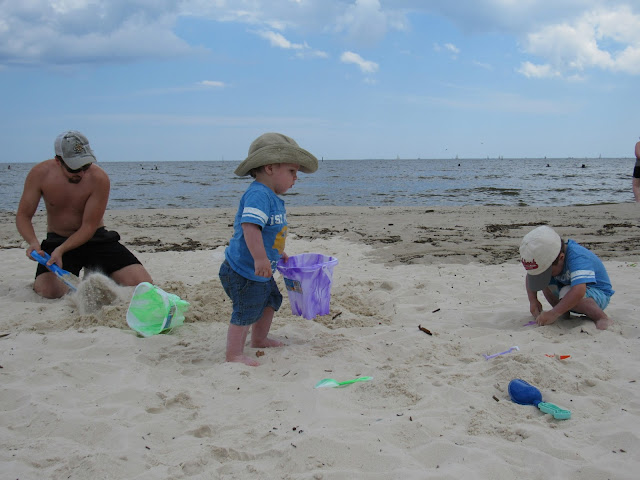 It's not the prettiest beach by any means but the boys had a blast!

Just imagine me in a chair, drinking a Chik-fil-a lemonade, with a big umbrella covering almost every inch of my body. I totally have a picture but I'm totally not sharing it because I look so pregnant. We packed a heck of a lot into 48 hours but we also had enough chill time at the hotel and we ate lots of good food so it was still really, really nice. We're already thinking about making it an annual thing! Except adding another day or two. 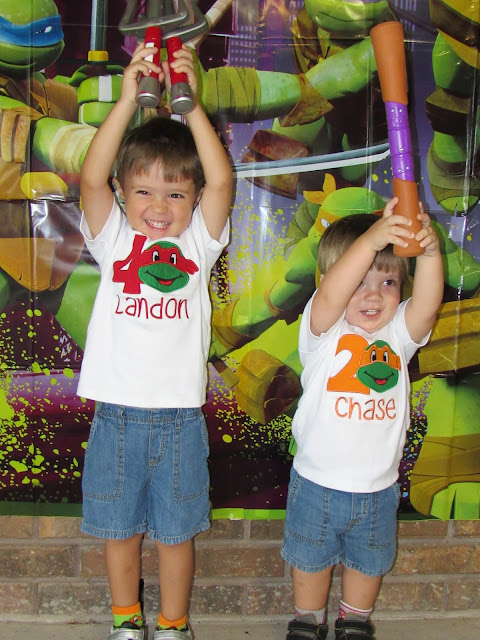 This past weekend we had a joint birthday party for the boys! Landon turned 4 last week and Chase won't turn 2 until after Aaron is born but there is no way we were waiting until then to celebrate. The boys just love ninja turtles (Logan probably more than the boys, ha), and it actually worked out perfectly because we ordered pizza (which totally goes with the theme!) and it was the easiest party ever. Mainly because of said pizza and the fact that I've found different TMNT things on clearance over the past year. Plus we already have a crapload of TMNT toys and stuffed animals which we used as decoration. (I am not ashamed to admit that I love having themed parties. Love love love.) 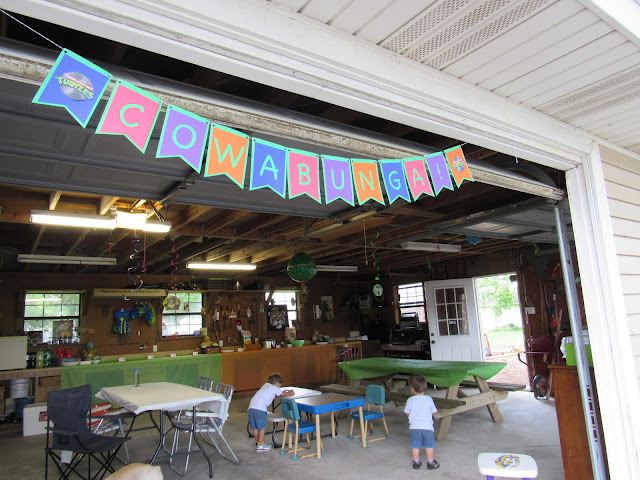 I was totally proud of that Cowabunga banner but the rain (that happened halfway through the party) totally ruined it. Boo. 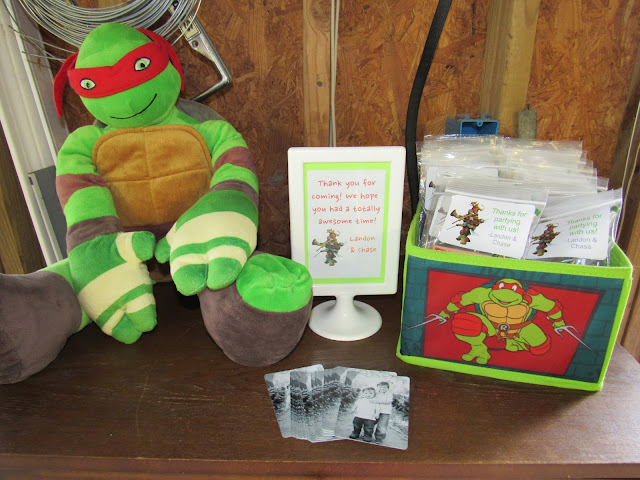 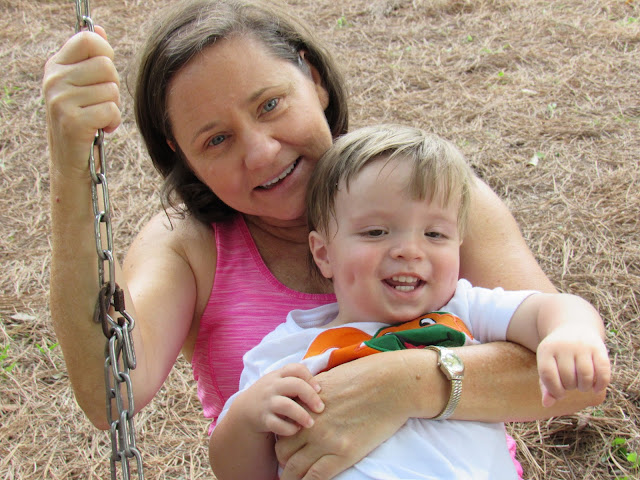 We had some time to kill before the party - which has happened approximately NEVER because we're always getting food ready - and my dad caught this gem of my mom and Chase swinging. 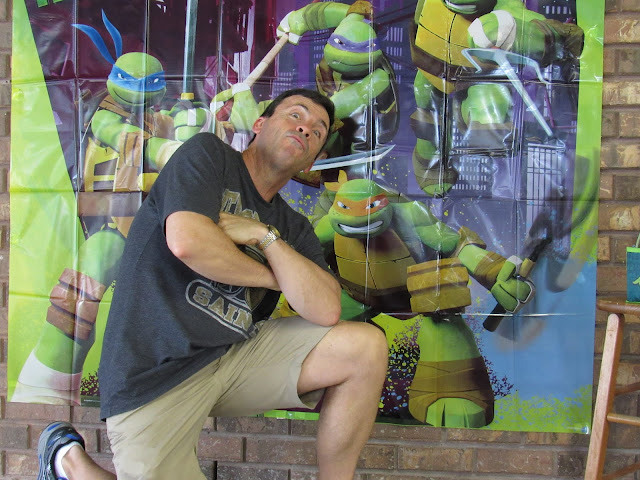 And then my dad decided to take a gangsta selfie of himself and I told him I was totally putting it on the blog so here you go! (I mean what I say, Pops.) 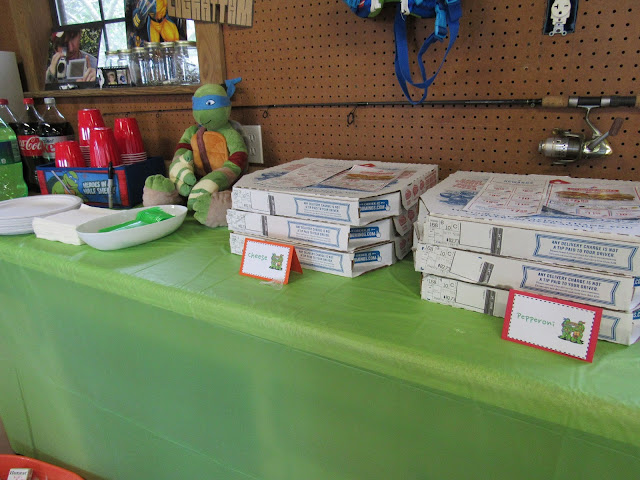 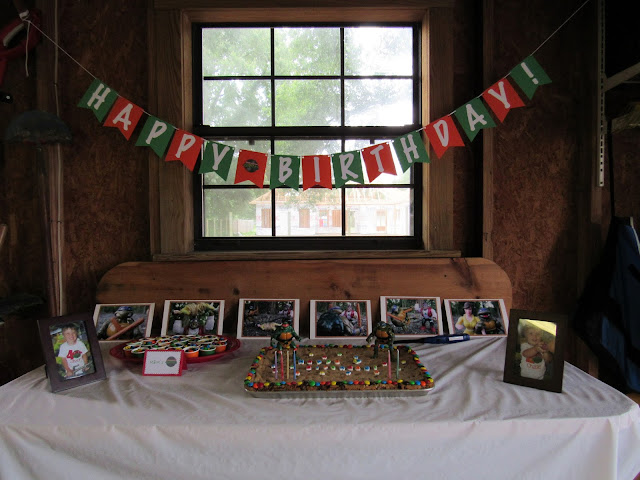 Fun fact: those pictures lined up behind the cake are from a project Logan did in college with ninja turtles (he has a film degree). Somehow we still had them around. 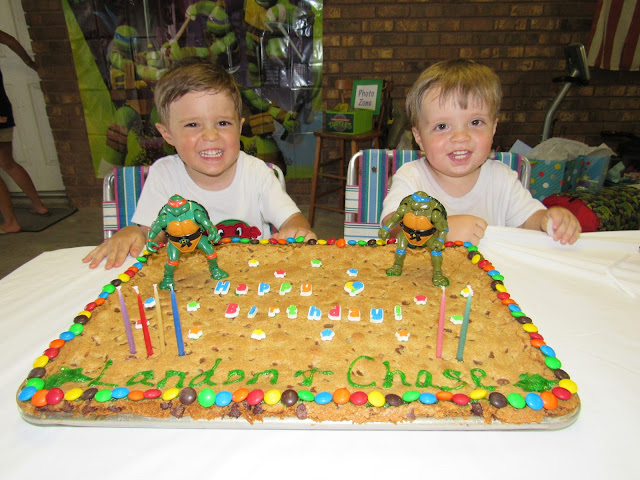 This was officially the ugliest cake I have ever decorated but it was still yummy. Here's the link to the recipe! I get so many compliments every time I make it, seriously. (I doubled the recipe this time, which was good because it was almost completely gone afterwards!) 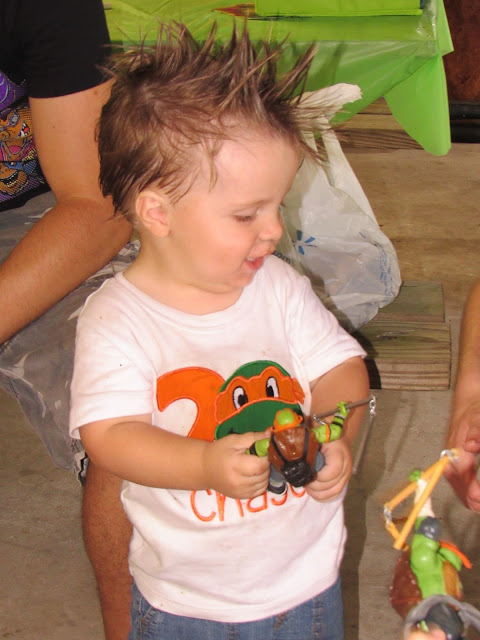 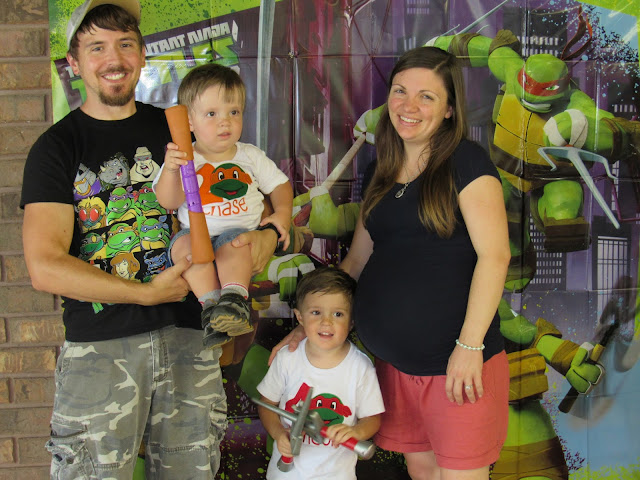 Speaking of bump, I saw Dr. H today! Yesterday I was pretty crampy for most of the day and had to take my contraction medicine. So now my cervix is pretty sore, and I was trying not to be aggravated about the fact that I still have over 2 weeks with this dang cerclage in...especially if I keep having cramping/contractions. Normally a cerclage is taken out at 37 weeks, but with me having a C-section, Dr. H was planning on just waiting until we were in the OR to take it out.

But! Dr. H actually agreed to try to take out my cerclage next week (he didn't want to today because I'm still a couple days shy of 37 weeks)! I think the fact that I'm having cramping and all already and that I went early with Chase makes him nervous. I mean, I for one surely do not want to go into full-blown labor with 2 stitches in my cervix. Ouch.

Hopefully he will be able to get them out without a problem (one stitch was buried with Landon which is why I ended up with a C-section in the first place), and then no telling what will happen from there. I don't mind waiting until the scheduled surgery if those dang stitches are gone, though!

Okay, longest post ever but just imagine me giving you a fist bump if you made it this far. ;)
Posted by Jen at 2:14 PM