A month for your marriage {bringing it together}

In case you missed it, I'm hosting a weekly marriage challenge! Read the previous posts: week 1, week 2, week 3, and week 4. 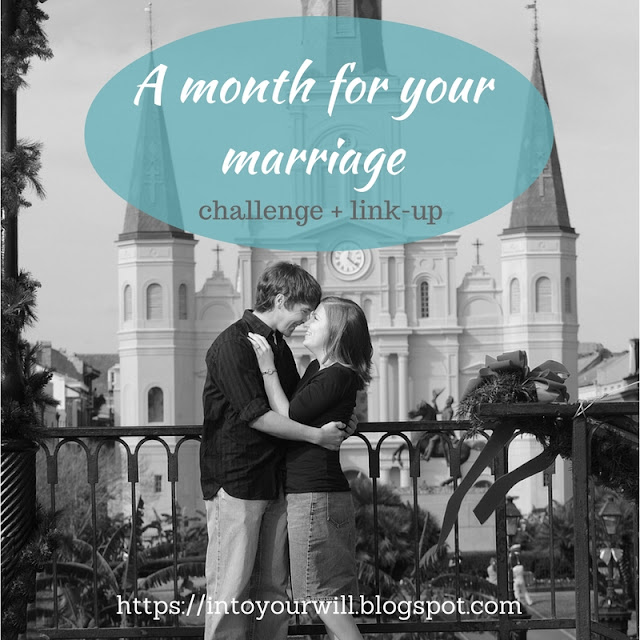 How I did on week 4, sacrificial love

I'm pretty sure Logan totally saw this coming, but I took out the garbage all week. He did also ask one night if I could show some sacrificial love by bathing the boys, so I did – and I put them to bed. Normally, Logan does that (when he's not working) since I'm dealing with Aaron. But the timing worked so Logan was able to feed Aaron some solid food while I dealt with the big boys and it was actually pretty nice to switch things up a bit.

So what did you do for your spouse? Link up your posts or share in the comments!


Whew, we made it! What did you think? How do you think you did?

I have to be honest and say that February was not the easiest month. I felt like I didn't do as well as I would have liked with the challenges because life was just kind of difficult already. Maybe that sounds crazy to you, but I tend to be a perfectionist.

But I will say that about halfway through the month, Logan and I started to feel closer than we have in quite some time. And that makes me think that the little things in marriage add up big time. Yes, marriage takes work...but sometimes it just takes small changes. I'm still writing affirming messages to Logan like I explained in week 3, and I'm finding myself willingly doing things that normally I would ask him to do (AKA sacrificial love). He's been responding in such a positive way!

My church recently hosted a couples date night that included a talk by a guest couple. They explained that marriage has a cycle (and I totally missed half of it because of Aaron so I probably won't explain it very well), but basically you go from Honeymoon stage to Disillusionment to Choice/Decision - to divorce, separate, or stay - to True Joy.

Unfortunately, it's not possible to say in True Joy forever. (Dang!) But I realized that when we're in Disillusionment, it's the perfect time to challenge ourselves to do more and put more effort into our marriage. So many couples get so discouraged in Disillusionment that it leads to divorce, and while I know there are exceptions, I do think that many marriages could be saved by just doing simple things.

I hope the last few weeks has enriched your marriage in some way! I would love to hear about it - feel free to include your thoughts in your post on sacrificial love. If you're blogging about it, here are some questions you can answer in your post:

Thanks for following along! I'll be back to my regular random blogging soon. ;)
Posted by Jen at 9:21 PM

Labels: a month for your marriage, marriage