Gosh, life just feels so crazy lately. It is certainly Lent and I just really want it to be Easter already. I'm sure you agree, right? Linking up with Kelly for some quick thoughts about all the things.

Logan and I have been training for a couple 5Ks. And by "training" I just mean going for a couple walk/runs every week. Logan pushes Landon in the single jogging stroller while I push the younger boys in the double stroller. People always make comments about how Logan is making me push the bigger stroller - but I actually want to do it! I'm more out of shape than he is and if you ever want to seriously train as a runner, push a double stroller. Trust me. (I'm totally making Logan push the double for the actual races, though. I'm no martyr!)

During one of those runs last week, we passed a guy on the sidewalk who was talking to a couple people inside a parked car. He looked up as we passed and yelled, "Y'all don't have a TV??" Being the type of person to assume the best rather than the worst, I just laughed because I thought his comment was about us running instead of sitting in front of a TV.

Then I felt like an idiot as I realized he was actually talking about the fact that we had 3 young boys in strollers. I'm still kicking myself for not realizing earlier because then I could have yelled back, "But sex is more fun!!" Seriously, y'all. People these days.

We finally took professional family pictures with Aaron outside my belly! 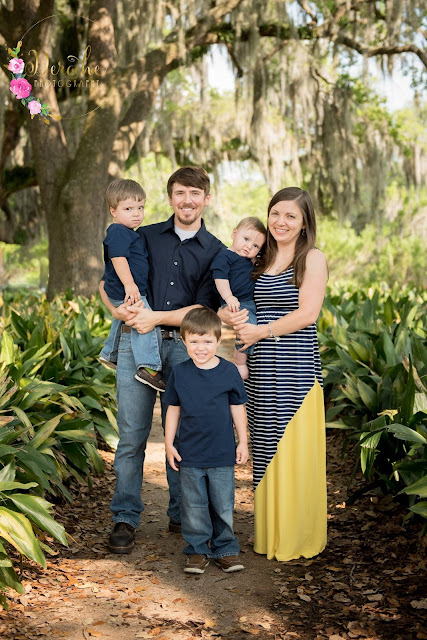 This is the only one I've seen so far and I CANNOT WAIT to see the rest. Chase refused to smile the entire time but Aaron and Landon were a couple of hams. Thanks to my friend Caroline for letting me borrow her adorable dress! And thanks to our friend Lauren for taking awesome pics! 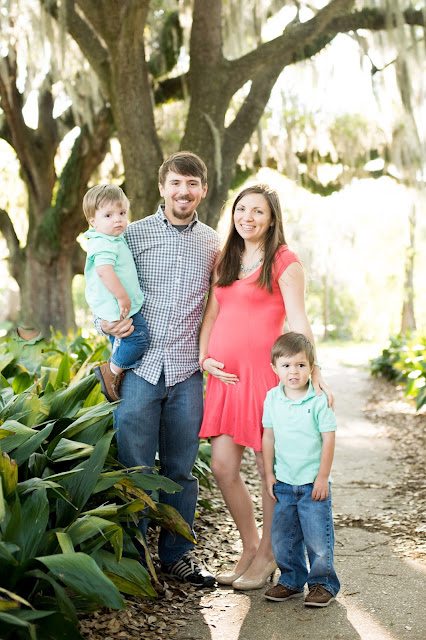 Flashback to a year ago when Aaron was inside my belly. Crazy how much difference a year can make! 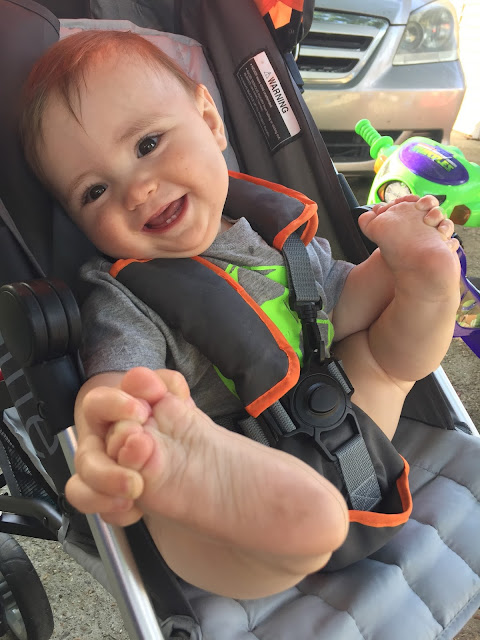 Speaking of Aaron, he has officially mastered the butt scoot in lieu of actual crawling. Chase did the same thing as a baby and it's hilarious. We plop Aaron down on one side of the room and a few minutes later he's on the other side...still sitting. 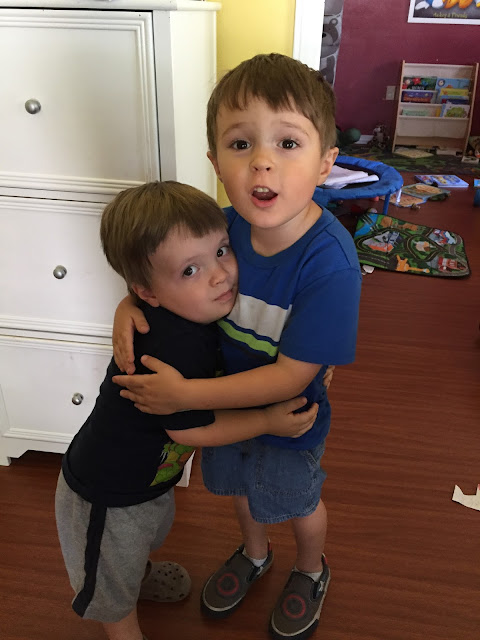 There have been so many days where Landon and Chase have been SO CRAZY, like in a run-around-the-house-like-crazy-people-without-ever-stopping kind of a way, and it makes me kind of worried about when Aaron will be joining them. I know they're young boys and full of energy, but does it ever stop?? Even on the days where they don't nap and we have plenty outside time, they're still nonstop and I'm just so tired. Mom of a bunch of boys, tell me your secrets to sanity. Please.

Two days after I spent a lot of money on my ticket to Edel, Logan's vehicle stranded him on the Interstate for the SECOND TIME IN TWO MONTHS. Then we spent even more money on the repairs and a rental car for a week. Sigh. We're looking into getting another car now. So, it's a good thing I already bought my ticket to Edel, otherwise I probably wouldn't be going. Adulting is hard sometimes, yo.


7. Words I loved this week

I'm reading 33 Days to Merciful Love right now and will finish on Divine Mercy Sunday. I'm loving it. One of my favorite quotes I read this morning:


"In sum, then, the Little Way is often a little way of darkness. It's about accepting that we are to put up with ourselves - with all the darkness of our weakness, brokenness, and sin - without getting discouraged. It's recognizing, without giving up, that some struggles are chronic. It's realizing, without despairing, that they may be with us till our dying day. But it's also about realizing that this does not prevent us from becoming saints." - Fr. Michael E. Gaitley in 33 Days to Merciful Love, Day 11