The crosses we bear

I've been thinking a lot about suffering lately, and how we all have crosses. Crosses we wish we didn't have to carry and that seem so.dang.heavy at times.

When I was in college, I used to tell God all the time, rather enthusiastically, “I'm willing to suffer if it brings others to you!”

I still haven't figured out if I was just holier back then or just really, really naïve about suffering. Probably the latter. (Although MAN when I read my journals from those days it seems like I was so much holier. Why is that??)

I think it's safe to say that my crosses back then were not quite as heavy as some now. Because, adulting. And parenting. It's hard, yo. 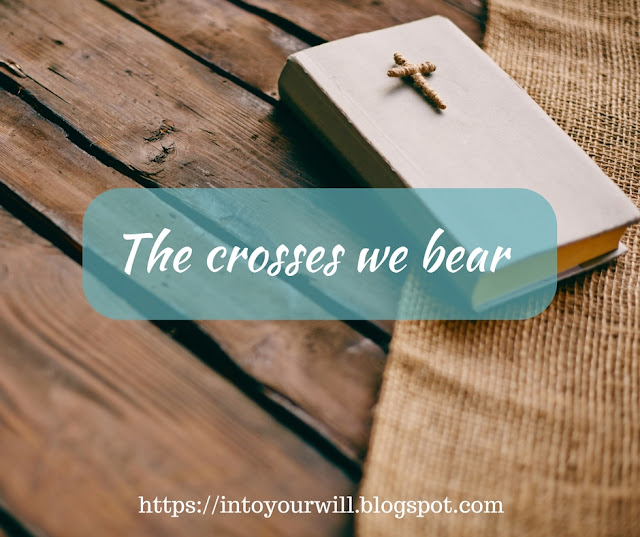 Anyways. Crosses. I remember thinking, back in our pregnancy loss and infertility days, how hard everything felt. All I wanted was a baby and for whatever reason, God had us wait. I think I struggled with it a lot because I knew I was supposed to be a mother, and I kind of didn't know what to do with myself until there was actually a baby in my arms. I thought that once I finally had a baby to take care of, everything would be better. And in some ways, it was.

But although those crosses of pregnancy loss and infertility have been lifted (for now, at least), I've had others placed on my shoulders since then. Plus there are still some crosses that I'm still dealing with years later and might deal with for several more years.

No matter what the cross is – whether it's dealing with parenting, marriage, finances, illnesses, relationships, whatever – it feels the same. Heavy, hard, and suffocating at times. I know there have been many times where I thought, if only I didn't have to deal with this particular thing, I would be okay...

But I know that's not true. As soon as one cross feels a little lighter, it only makes sense for another cross to feel heavier.

I used to really struggle with why God gives us certain crosses. I'd look at other people and think, Man! If only they knew how easy they have it. I'd much rather deal with their suffering than mine. I'd be lying if I said I still wasn't tempted to think that, but thankfully, I've come a long way.

But of course I'm learning that God gives us exactly what we need to become better people, and often it comes in the form of a cross. And that's going to look different for everyone. It's also funny that as much as I wish I didn't have certain crosses, I'm also thankful for them in a way, because I learn something from each and every one.

With pregnancy loss, I learned so much about grief and how it's different for everybody. With infertility, I learned that having babies isn't something to take for granted and that God's timing is always best. With difficult relationships, I've learned humility. With financial struggles, I've also learned humility (I'm stubborn, I guess), as well as to trust that God will provide. The list goes on and on.

One of my favorite mysteries of the rosary is the 4th Sorrowful Mystery – Jesus carrying His cross. Whenever I feel the weight of my own cross, I think about Jesus and how he carried His cross for us. He fell over and over, yet He got back up every single time. And all along the way He had people help him, from Simon to Veronica to the weeping women. He even met His mother, our Blessed Mother, and I can't help but think how all of those people gave him a little motivation to keep going.

God gives us those people – or graces, or consolations, or whatever you want to call them – too. Because I know just when I think I can't carry my cross anymore, I come across a Scripture passage that speaks to my heart in the most perfect way. Or I start reading the most timely book dealing with my situation. Or I have a friend randomly text me asking how I'm doing.

Yes, we all have crosses, but we don't carry them alone. And I'm so, so thankful. God loves us too much to stay just as we are, but He always gives us the grace to carry our crosses – even when it doesn't feel like it.

“Afflictions are the most certain proofs that God can give us of His love for us.” - Saint Vincent de Paul