By March, it became clear that we liked each other. He made me laugh a lot and we always had fun together - even though we both hated chemistry.

We spent more and more time together, and in May, Logan got down on one knee and asked me to be his girlfriend. It was adorable, and of course I said yes!

It wasn’t even a month before I realized that I could see myself marrying him. We didn’t say “I love you” to each other for several more months, but I knew early on that I loved him. I never knew how kids so young could say those words to another person until I started dating Logan.

We had our ups and downs for sure. It was mainly me - I broke up with him not once, but twice, when we were in college. I was busy with nursing school and still felt called to discern a religious vocation, among other things.

When I was a junior in college, though, I discerned that God was indeed calling me to marriage with Logan. It was almost 4 years since we first started dating, so we got back together with the intention of getting married. Logan proposed less than 7 months later, and we were married just 10 months after that.

It still seems crazy to me that we started dating in high school. Yet, I wouldn’t have it any other way. I love looking back at over a decade of photos and seeing Logan in so many of them. It was so much fun attending our high school reunion together. We've grown so much, been through so much, and I'm so thankful that we unexpectedly got to know each other back in the spring of 2004.

On our last day of high school, Logan and I made sure to go visit our chemistry teacher and thank her for assigning us seats next to each other. I think Ms. B made a joke that day about us getting married eventually, and I wish we had some way to let her know that we actually did get married. Teachers can impact our lives in more ways than we thought! 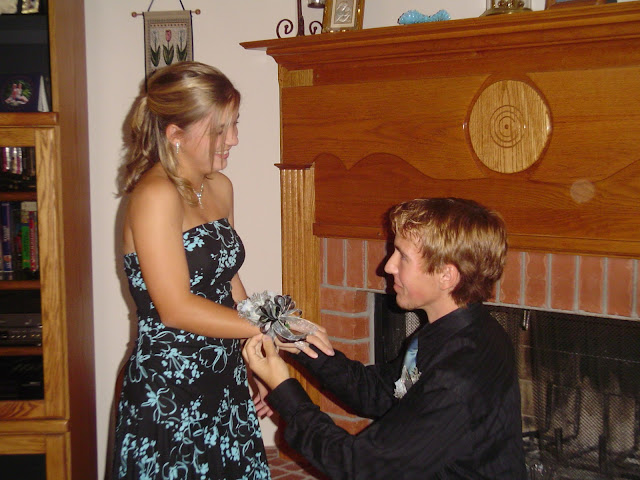 Logan and me for our senior year Homecoming dance
Posted by Jen at 7:00 AM