(This story might sound familiar to some of you longtime readers but I added some details!)

Logan, on the other hand, loves surprises. So that means he often surprises me, and I have to admit he’s so good at it that I usually don’t mind.

Two years ago when we had a 1-year old and a 3-year old, I committed to running a huge silent auction (for the second year in a row) for one of our favorite non-profit organizations. It was a lot of work, and I spent most of my spare time for months on auction tasks.

Logan had been saying he wanted to take me out a date night the week before the auction (in November), since he knew I’d be stressed and would need a night out. That was so, so true - especially because we actually found out I was pregnant just three weeks before the event.

He had one of our good friends, Lindsey - godmother to our middle child - come over to watch the boys while we went to dinner. On the way to the restaurant, Logan told me he was proud of all the work I was doing and that he wanted to give me kind of an early Christmas gift. He handed me Matthew West’s new CD.

Matthew West is one of my favorite Christian artists, and I actually named my blog after some of his lyrics. I already had some of his other CDs and didn’t even realize he came out with a new one, so I thought it was such a sweet gift.

Then I opened the CD and found 2 concert tickets. To Matthew West. That night. Say what?

I should mention that Matthew West had never come to our state of Louisiana - that I was aware of - so I had never seen him in concert even though I’ve always really, really wanted to. So when I realized that we were actually going to Matthew West’s concert instead of dinner, I couldn’t believe it. How in the world did Logan pull this off without me realizing? Why did I not know this concert was even happening? Honestly, Logan is a terrible liar and I usually know when he’s up to something, but I guess I was too preoccupied with the pregnancy and the auction.

At first, I kind of panicked a little because we had told Lindsey we were just going to dinner twenty minutes away. But we were actually going to a concert an hour away. That’s a much longer date than I had anticipated! Logan assured me, though, that Lindsey knew the real plans from the beginning, so I took a big sigh of relief and tried not to stress.

My second thought was: What are we going to eat then? Because, pregnancy. I was in the midst of the first trimester and around-the-clock nausea, and I was counting on eating in the next twenty minutes. Based on our route to the concert, I knew there wasn’t anywhere to stop for at least that long - and it would be mostly fast food, something I rarely eat. Plus, I had really been looking forward to eating at the restaurant where I thought we had reservations.

But before I could even voice my concerns aloud, Logan pulls out a bag of takeout sushi from behind my seat.

I totally cried. I’m not a big crier but for some reason the tears kept coming. I had probably only cried one other time that Logan did something so romantic - and he’s done a lot of romantic things. I mean, I didn’t even cry at our wedding or when he proposed! I was already so surprised at the whole concert thing, since Matthew West legitimately is one of my favorite singers. Yet Logan had to go and surprise me again with one of my favorite takeout foods.

Logan regrets not having the whole surprise on video, but I’m totally fine not having evidence of my emotional instability. I wanted to blame the pregnancy hormones but it was probably a combination of that, stress about the auction, and being so thankful I married a romantic.

And because Logan absolutely thinks of everything, he even sprayed a bunch of Febreeze in the car so I wouldn’t smell the sushi. Now that’s how you surprise your pregnant wife! 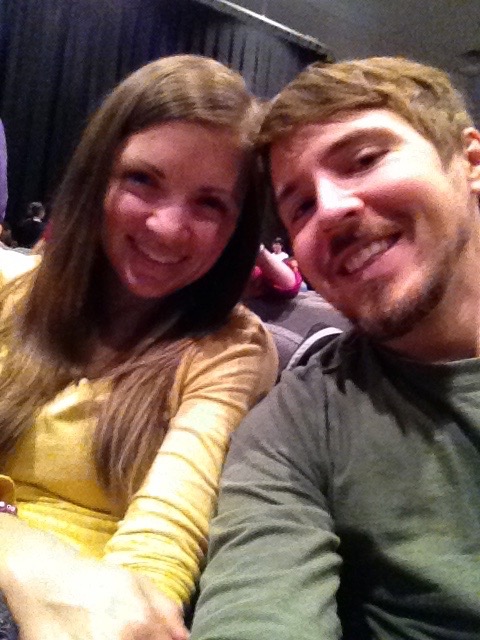 Super blurry picture but it's the only picture we took of us at the concert!
Posted by Jen at 7:00 AM