The best surprise ever {day 19}

While our initial adjustment from two to three kids wasn’t too bad, I struggled once our third baby, Aaron, was three months old. He stopped sleeping well, our other boys kind of went crazy, I couldn’t keep up with housework despite taking a break from the Internet, and I just didn’t know what God was trying to teach me throughout it all.

One weekend when Aaron was five months old, I had pretty much the hardest weekend with the kids since becoming a family of five. Logan was at work all weekend, of course, and when he got home, he could tell I needed a break.

Thankfully, we just so happened to be taking care of my cousin’s dog at the time while they were out of town. Normally, Logan would drive to their house (10-15 minutes away) to feed the dog and let her back inside for the night. But this particular night, he told me to go so I could get out of the house for a bit.

It was much needed. When I returned, our two older boys were in bed, and Logan told me to take off my pullover (it was actually cold for once in Louisiana). So I did. Then he told me to take off my shirt. I rolled my eyes but Logan insisted, “Just trust me!” So I took off my shirt. He continued to ask me to take off another article of clothing, and then another, and I really had no clue what he was getting at - especially because he was holding our wide-awake baby and I knew it wasn’t like we were about to get it on or anything. Yet he kept insisting that I trust him. Normally I would totally resist Logan’s weird shenanigans like that but I think I was too tired to care at that point. It had been a really rough weekend. Heck, it had been a rough couple of months.

Once I was completely naked in our living room (why yes, he continued to ask me to take off one article of clothing after another until none were left), Logan led me to the guest bathroom, opened the door, and said, “Go have a moment to yourself.” I looked inside and saw the bath tub full of piping hot water, surrounded by lit candles, and there was a glass of wine propped up on the side.

It was a little piece of Heaven, I tell you. Logan has certainly done his fair share of awesome surprises, but this one ranks up at the top because it was exactly what I needed at that time. I think a lot of time he feels almost at a loss for what to do when he sees me struggling, but this time he totally nailed it - even though I’m not a big fan of baths. Once I made myself comfortable in the hot water, took a sip of wine, and opened my Kindle Paperwhite, I thought, Why have I never done this before?

Unfortunately, the blissful bath didn’t even last ten minutes because our baby wouldn’t stop screaming for me. Hashtag real life. Logan even tried to walk outside with him so I wouldn’t hear, but a momma can hear her baby’s cries anywhere. So after I realized my baby was not calming down at all, I reluctantly got out to go rescue Logan. He was upset, naturally, since he wanted me to be able to enjoy the bath. But like I told him, it really was the effort that counted. In my mind, he earned a million brownie points - which is exactly why I let him take advantage of the still-hot water while I nursed our baby to sleep.

Somehow Logan manages to surprise me with exactly what I need, and sometimes it’s something I didn’t even realize I needed! I can count on one hand the number of times I’ve had a bath in my adult life, and most of those were when I was pregnant and on bedrest. But thanks to his awesome surprise, I now know that a hot bath and silence is exactly what I need sometimes. The candles and wine are just a bonus. 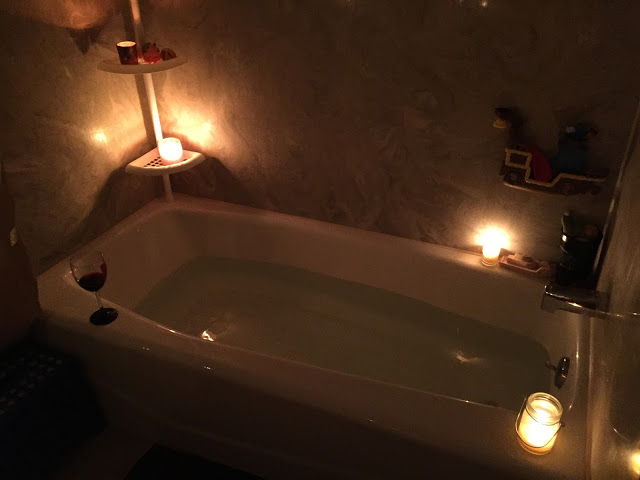