Is this one of those posts where I talk about a bunch of random things going on? Yes. Yes, it is.

Whenever I have several different things I could be doing, I have a tendency to do something not as time-sensitive. It's so dumb, I know. Like, I know I should be planning my next CCD class or scheduling a doctor appointment or folding the laundry, but how about I shop for Easter basket stuff instead? Yeah. But hey, I'm still being productive! (Cue eye roll. I'm dumb sometimes.) (But hey, I'm blogging, at least.) (And I'm done with Easter baskets.)

But I did realize this week that having people sleepover at your house for a few days is a GREAT motivation for actually cleaning your house.

There are some periods of time where I can fit in a decent amount of reading and other times where I struggle fitting it in. There were a few weeks where I was realllllly struggling because life was nuts. But I know I need to fit in the time because my soul needs it....so I've gotten better again. The reading life is similar to life in general - sometimes you have slumps, and that's okay. (Slump is such a weird word, isn't it? SLUMP. Slump.) (Ok, I'm done.)

The same goes with date nights (or day dates, which works better for us right now). Sometimes we're SO good at going on regular dates....and other times we go a few months without making the time. We went like 3 months without any dates and then went on 3 within 10 days. And we only spent money on one of them! Holler. Gift cards are awesome.

Our church parish has grown so much over the last few years, which is great...but it also means we have a lot going on allll the time, it seems. And since I'm Mrs. Over-committed, I'm helping with the big spring fundraiser, VBS during the summer, and the big fall fundrasiser. Oh, and teaching CCD once a week. And helping plan some other events. It's all good and important things, of course, but whew. It's hard to keep up sometimes.

Logan and I unexpectedly got a large sum of money recently, and because it's been years since this has happened, we spent several days talking about how we could best use it. Like, we had about 20 things we've been wanting to do, like replace the kitchen blinds that are destroyed by the dog (seriously, it's bad) or get new living room furniture to replace our ridiculously old hand-me-down couch. But we eventually decided to do the grown-up thing and pay off our car loan. WOOOO. Which is especially awesome because we joked before our Disney trip that we could have paid off our car instead of going to Disney. But God provides for reals. And now hopefully we will be able to save money to do all of the things we've been meaning to do!

I didn't give up anything for Lent, which kind of makes me feel lame sometimes. BUT I am waking up at 5:30 during the week on the days that Logan goes to work, which is just really hard sometimes. And that kind of means I'm giving up sleep, right? ;) I am definitely seeing the fruit of it, though. It's a much better start to my day! I actually get through Morning Prayer (Liturgy of the Hours) without a toddler screaming at me, Logan and I get to talk in the morning and sometimes pray together, and I get a few things done before the rest of the house wakes up. (That post about my liturgical binder? Definitely posted that early in the morn. Winning. I felt so productive that day.) 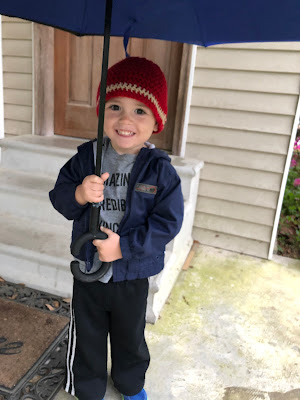 Pic of toddler holding an umbrella and wearing a homemade beanie because that's much cuter than said toddler screaming his head off.

It always boggles my mind when people say they couldn't be a SAHM because they were so bored. Like, were your kids perfectly behaved? Was your house immaculate? Do you not read? Do you not have hobbies? Because I have never, ever been bored since Landon was born (almost 7 years ago!!) and even though I don't have an official job and I only have one kid at home during school hours, I still can't find time to do all the things I would like. YOLO.

Somehow I could write about a few more things but maybe I'll save those for another day.
Posted by Jen at 11:39 AM