When Aaron was a baby, and we knew we wanted/needed a bigger break between our next baby, we mentioned how it would be REALLY nice if he were potty trained before we had another baby. But since NFP tends to make you open to a baby sooner rather than later (at least that's been our experience), we figured that wouldn't actually happen.

We didn't potty train the other boys until they were 3 and 3.5, but at some point we realized that Aaron would be probably be ready before that.

We were right. Because Aaron is completely potty trained (even at night!), and it took less than 2 weeks. We started a month before his 3rd birthday (which is in a couple weeks).

(Aaron actually tried to potty train himself back in February, but since we were going to Disney in March, we were like NOPE and just used pull-ups for the first time ever because we were not ready to go all the way.)

It's really weird. Gone are the days of diapers and baby things. And while we will jump back into that one day, God-willing, we're trying to enjoy this sweet spot while we're in it.

We keep having older parents tell us how hard the teenage years are, and while I know the phrase "bigger kid, bigger problems" has some truth to it, I think those parents also forget how exhausting and overwhelming little kids can be. You have to do literally everything for them - change their clothes, brush their teeth, buckle their seat belts, fix their food, etc.

I think parents also forget how hard it is to make your marriage a priority when there's always a baby or toddler waking up or screaming or needing something only you can give them. Logan and I talk often about how one day, we will be able to just leave the house! No babysitter or anything because our kids will be able to fend for themselves for a couple hours. Sure, teenagers can be hard (although honestly, my siblings and I were not...and that's coming from my parents), but there are a lot of perks too. Not only the independence, but being able to talk to them about mature things and realizing that you raised some pretty awesome human beings. (Well, here's hoping, anyways.) 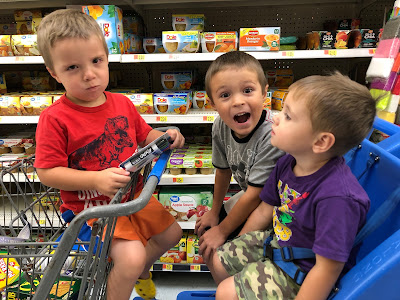 A trip to the grocery store is still crazy but it's probably considerably less crazy than it was 2 years ago.

Our life has drastically changed in the last 18 months. We went from 2 in diapers to no diapers at all. Two of our kids can buckle themselves in the car and the third needs just a little assistance. They can all go to the bathroom by themselves (with the exception of Aaron when he poops) and change their clothes all by themselves.

Landon just turned 7 and has been voluntarily doing the dishes some days. Any 3 of our boys known how to feed the dog and let her outside. They can get their own snack, and the two oldest can fix a bowl of cereal and make their own sandwiches.

There are certainly still plenty of tantrums and fights (oh my gosh, seriously), but we can send the boys outside to play without having to hover around them.

They still sometimes take forever to fall asleep at night, and often wake up earlier than they should...but they do sleep through the night.

We know this is almost the little sweet spot between babies and teenagers, and we're grateful for being able to experience it. It's really got me thinking about the stage before this and the stage that comes after, and I'm not sure you can say one is harder than the other. It all depends on the temperaments of the kids AND parents, and a million other factors.

Because even though life is easier is many ways, I'm still tired. Being a mom is exhausting. I've almost forgotten how even more exhausting pregnancy and babies can be, and it wasn't that long ago! (So seriously, I think older moms forget big time.)

Instead of saying to moms of littles "the teen years are even harder," I think we need to start saying "enjoy the stage you're at!" Because every stage, from babies to teens and everything in between, has its own struggles and hard moments. Take it from a parent in that supposed sweet spot. It's called being a parent!

I think as long we accept that our kids will do stupid things, and we remember that God can redeem anything, we will be okay. Enjoy the stage you're in now, because the next one is going to be different!
Posted by Jen at 4:57 PM